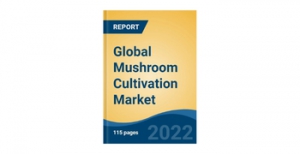 The global mushroom cultivation market is expected to grow at a steady rate in the forecast period, 2023-2027. Factors such as growing per capita mushroom consumption and the rise in awareness about the multiple benefits of mushroom consumption are driving the market growth. Surge in demand for vegan and natural food in the diet and increasing health-consciousness among consumers are the prominent factors expected to accelerate the demand for the global mushroom cultivation market.

Also, rise in the efforts by the market players to adopt the latest technologies will boost the commercial production of mushrooms, which is expected to create numerous growth opportunities for the market players in the global mushroom cultivation market during the forecast period. 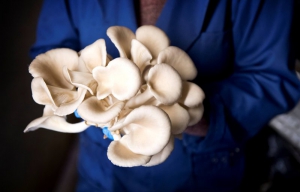 With “Doubleganger and Zwam” sausage rolls, grower Mariëlle van Lieshout from Liessel in the Netherlands wants to encourage consumers to eat more oyster mushrooms. "There are many opportunities, but you have to see them and you have to be patient."

We are trying to develop new products, because only betting on the consumption of fresh oyster mushrooms is not enough. There are many opportunities, but you have to see them and you have to be patient.

RIJP
The entrepreneur has recently joined the RIJP platform developed by farmers, ZLTO and Geodan. The aim is that farm shops, caterers and retail can purchase a diverse package of regional products from farmers from the platform. Such a regional product is the “Doubleganger”, which Van Lieshout came up with together with regional product store 't Streeckhuys in Deurne the Netherlands. It is a hamburger in which half of the meat has been replaced by oyster mushrooms.

“With the Doubleganger belongs the slogan: the only male hamburger that your wife also wants to eat”
Mariëlle van Lieshout, Oyster Mushroom grower in Liessel in the Netherlands

The Doubleganger contains less fat, salt and calories and more fiber and taste than a regular hamburger and is a sustainable and healthy choice without consciously eating less meat," says Van Lieshout. 'We use the following slogan: the only male hamburger that your wife also wants to eat. That fits in nicely with that.

Wider range
All breeders who are members of the oyster mushroom association may market the Doubleganger. "We hope that we can reach a larger audience with a limited marketing budget," says the entrepreneur.

Van Lieshout also stood at the basis of the Zwam sausage roll, with a filling of half oyster mushrooms and half pork. 'An additional advantage is that you can store such products in the freezer for six months, while you can only sell oyster mushrooms fresh. With this, we hope to somewhat offset the peaks and troughs in sales in the future. "

Van Lieshout has also found a new destination for the stalk of oyster mushrooms, normally a residual product. The Eindhoven designer Doreen Westphal from Botanic Bites has been pioneering with tapas, saté and sausage from the stalk since 2016. In 2019 she came up with a variant on shoarma meat: Zwarma.

The grower also implements sustainability in other areas: the straw from the cultivation packages goes back on land as a soil improver and the nursery has 343 solar panels, good for a capacity of 100,000 watt-peak.

PlanetProof
The nursery is PlanetProof certified, but Van Lieshout is not interested in organic certification. 'The demand for organic oyster mushrooms is lower than the supply, so that makes little sense. But if that demand grows and I can get a biological substrate, I want to make the switch. " Most oyster mushrooms end up at retail companies in the Netherlands, Belgium and Germany and can be kept for around a week after purchase.

Companies sometimes offer the entrepreneur their coffee grounds to be processed into the substrate for oyster mushrooms. 'I want to think along with that, but then I also expect something in exchange , for example, that they will sell the Doubleganger or the Zwam sausage roll in their canteens. It must be beneficial for both parties. "

As a daughter of mushroom growers, Van Lieshout had a dream: the mushroom farm of the future. 'A mushroom can grow up to 4 percent per hour and therefore a picker has to make many decisions. With smart software I wanted to make harvesting easier and more automated. " It was not possible to get the financing for the own nursery, but the idea did not let her go.

Harvest guide
Together with two partners, Van Lieshout founded software company Advanced Mushroom Research in 2011. The Harvest Guide, developed by them, measures properties such as diameter, bulging of the hat and structure of the mushrooms above a growing bed. Colored lights on selected mushrooms then give picking advice to the picker.

At Koolen Champignons in Slootdorp there is a test setup of the Harvest Guide. With this the initiators hope to interest mushroom farms all over the world. 'The next step is robotization of the picking process. That is desperately needed, because it becomes more difficult to find and retain harvesting staff, "says Van Lieshout. 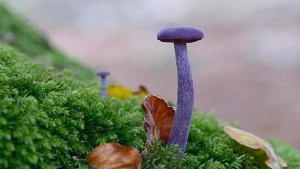 Alien Fungi: Do you dare to eat these violet mushrooms?

The world of fungi is wonderful, weird and wild thanks to its rich palette of colors, strange shapes and infinite textures. Contrary to what you've been told, not all colorful mushrooms are deadly, like the red fly agaric. Below are two violet mushrooms that are edible and one beautiful blue mushroom that nobody dares to consume.

Photo above is of an Amethyst Deceiver (Laccaria amethystina)

The amethyst deceiver has a bright lilac color. Its cap and stem become paler and almost white in dry environments or as the mushroom grows older, making it hard to recognize. Thus, the name "deceiver". The violet mushroom can be found in leaf litter of coniferous and deciduous woodland during late summer and autumn. Though people often think that colorful mushrooms are toxic, the amethyst deceiver is edible.

Read the full article and about more edible mushrooms on the webiste of GGTN. 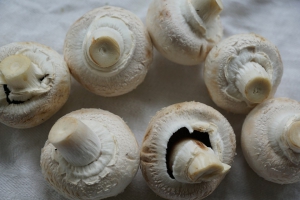 Mushrooms are full of antioxidants that may have anti-aging potential

UNIVERSITY PARK, Pa. — Mushrooms contain unusually high amounts of two antioxidants that some scientists suggest could help fight aging and bolster health, according to a team of Penn State researchers.

In a study, researchers found that mushrooms have high amounts of ergothioneine and glutathione, both important antioxidants, said Robert Beelman, professor emeritus of food science and director of the Penn State Center for Plant and Mushroom Products for Health. He added that the researchers also found that the amounts of the two compounds varied greatly between mushroom species.

"What we found is that, without a doubt, mushrooms are the highest dietary source of these two antioxidants taken together, and that some types are really packed with both of them," said Beelman.

Beelman said that when the body uses food to produce energy, it also causes oxidative stress because some free radicals are produced. Free radicals are oxygen atoms with unpaired electrons that cause damage to cells, proteins and even DNA as these highly reactive atoms travel through the body seeking to pair up with other electrons.

Replenishing antioxidants in the body, then, may help protect against this oxidative stress.

"There's a theory — the free radical theory of aging — that's been around for a long time that says when we oxidize our food to produce energy there's a number of free radicals that are produced that are side products of that action and many of these are quite toxic," said Beelman. "The body has mechanisms to control most of them, including ergothioneine and glutathione, but eventually enough accrue to cause damage, which has been associated with many of the diseases of aging, like cancer, coronary heart disease and Alzheimer's."

According to the researchers, who report their findings in a recent issue of Food Chemistry, the amounts of ergothioneine and glutathione in mushrooms vary by species with the porcini species, a wild variety, containing the highest amount of the two compounds among the 13 species tested.

"We found that the porcini has the highest, by far, of any we tested," said Beelman. "This species is really popular in Italy where searching for it has become a national pastime."

The more common mushroom types, like the white button, had less of the antioxidants, but had higher amounts than most other foods, Beelman said.

Cooking mushrooms does not seem to significantly affect the compounds, Beelman said.

Beelman said that future research may look at any role that ergothioneine and glutathione have in decreasing the likelihood of neurodegenerative diseases, such as Parkinson's disease and Alzheimer's disease.

"It's preliminary, but you can see that countries that have more ergothioneine in their diets, countries like France and Italy, also have lower incidences of neurodegenerative diseases, while people in countries like the United States, which has low amounts of ergothioneine in the diet, have a higher probability of diseases like Parkinson's Disease and Alzheimer's," said Beelman. "Now, whether that's just a correlation or causative, we don't know. But, it's something to look into, especially because the difference between the countries with low rates of neurodegenerative diseases is about 3 milligrams per day, which is about five button mushrooms each day." 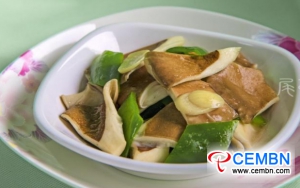 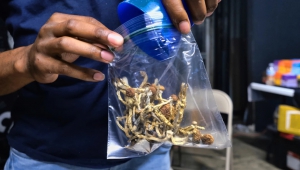 A future where a key ingredient of psychedelic mushrooms called psilocybin is regularly used to improve our mental health is none too far off. This month, the Food and Drug Administration (FDA) granted a “breakthrough therapy” designation to a non-profit company developing psilocybin as a treatment for clinical depression. The label is intended to speed up the review process needed for approval.

As far back as the 1970s, some therapists have used the mind-altering effects of hallucinogenic compounds like psilocybin to treat their patients’ depression or anxiety (usually alongside conventional therapy). But as these compounds became popular recreational drugs, governments around the world banned their use entirely, including in a medical setting. Over the years, though, advocates have slowly convinced regulatory agencies like the FDA to reconsider this stance, especially given the lack of options available to people who don’t respond to typical antidepressants (which may be as high as 55 percent of all patients). 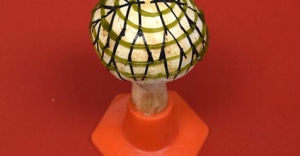 A regular shop-bought mushroom has been turned into an electricity generator in a process scientists hope will one day be used to power devices.

The “bionic mushroom” was covered with bacteria capable of producing electricity and strands of graphene that collected the current.

Shining a light on the structure activated the bacteria’s ability to photosynthesise, and as the cells harvested this glow they generated a small amount of electricity known as a “photocurrent”.

The fungi supported this process by providing the bacteria with viable surface on which to grow as well as nutrients to stay alive.

» Check out the video and also read more