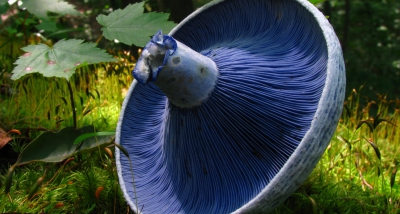 A mushroom with a special appearance

When you think of mushrooms, you often think of spring. But do you also know why so many mushrooms can be found in the autumn? This is because it generally rains a lot in the autumn while the temperature is still fairly high. Then it is moist and warm and mushrooms love that. Of course they stand out because of their beautiful colors and the most famous and one of the most colorful is of course the Amanita Muscaria, but which is not edible!
They can be found in all colors but the Lactarius Indigo with its appearance, is a very special one. Commonly known as the Indigo Milk Cap, this blue mushroom grows most in North Africa, Central America and East Asia. The Lactarius Indigo grows on the ground in both deciduous and coniferous forests. The color of the fruiting body and also the milk that oozes when the mushroom tissue is cut, is indigo blue.

If you have read the foregoing you would think that this must be a very poisonous mushroom. But despite its color, this mushroom is not poisonous and completely edible. They have a bitter, peppery taste. When you cook them, the taste is similar to a portobello. Lactarius indigos lose some of their blue color during cooking and turn greyish-blue. You can use them for example, in a grilled dish or in a soup. But in whatever dish you use this beautiful mushroom, the dish looks heavenly.