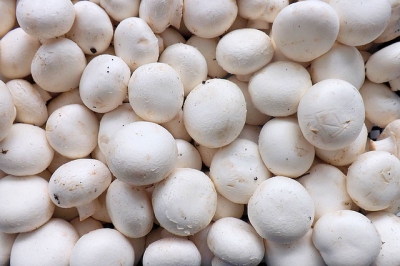 The cultivation of mushrooms is on the rise in Iran. Over 90,000 tons are produced annually in large, covered, climate-controlled halls. The largest producers use knowledge and technology from the Netherlands.

Most of the mushrooms grown in Iran are destined for the local market, a small part is exported. The Netherlands, itself one of the largest producers in the world, has formed the basis of contemporary mushroom cultivation in Iran. Three of the four largest producers have obtained their technology and knowledge from the Netherlands.

The technology is at a fairly high level. Iranian growers are well acquainted with Dutch suppliers of technology and knowledge in this sector. Can the Dutch business community reconnect?

The current recession is not making things easy for Iranian producers. For example, inflation has made the euro considerably more expensive. In addition, doing business with Iran has become more difficult due to the US sanctions that make financial transactions more difficult.
In Iran, therefore, more and more attention is being paid to local suppliers who can deliver comparable quality. This is possible in many cases, but not always. In terms of knowledge and innovation, the Netherlands is still at the forefront of mushroom cultivation.

Ask for knowledge and training

The major producers in Iran are mainly interested in consultancy and training. In addition, there is a demand for chain organization and logistics. There is also still a lot to be gained in terms of the diversity of edible mushrooms on the Iranian market. Due to the recent elections in the US, the hope is that the sanctions will gradually be phased out in 2021. This will create new opportunities for Dutch investors.

Dutch companies can contact the agricultural council in Tehran for market access and business support. For example, a company in substrate cultivation for mushrooms was recently informed about the phytosanitary requirements for export to Iran.

In ten years time, mushroom cultivation in Iran has increased from 48,500 tons to 82,000 tons. China, USA, Poland, the Netherlands and France are the largest producers in the world. China accounts for approximately 70% of world production. Iran ranks tenth, but is rapidly rising in the ranking. The sector wants to grow to an annual production of 150,000 tons, in line with the worldwide growth of the mushroom market.

Growing mushrooms is a labor-intensive process. Based on the latest statistics, there are 1,045 mushroom companies in Iran, which creates more than 7,000 jobs. Currently almost all production is destined for the local market. Iran exports less than 2% of its production to neighboring countries such as Iraq and Qatar, but wants to increase exports.

One of the problems with mushroom exports from Iran is the lack of transport infrastructure. Because fresh mushrooms are perishable products, they must be properly transported to avoid any loss of quality. In addition, administrative and bureaucratic procedures at the border with neighboring countries lead to product loss.

'Of the more than twenty types of mushrooms that are commercially cultivated worldwide, production in Iran consists almost exclusively of white (button) mushrooms'

Mushrooms are in demand in Iranian cuisine. Yet consumption per inhabitant is only 1 to 1.2 kilos per year, which is less than the world average of approximately 2 kilos. The average in Europe is 3 kilos. So there are still opportunities for growth in the local market. Consumers are also increasingly aware of the beneficial nutritional and health aspects of mushrooms in their diet: low in sugar and fat, and high in protein. In addition, they are convinced of the medicinal effect of mushrooms.

Of the more than twenty types of mushrooms that are commercially grown worldwide, the production in Iran consists almost exclusively of white (button) mushrooms. These are freshly picked and packaged and then find their way to the consumer via the many small and large supermarkets in the country. Only a few dozen producers are engaged in the cultivation of other types of edible mushrooms, such as oyster mushrooms and Shiitake. A few growers focus on the production of medicinal mushrooms.

The larger producers also control the production of compost and spawn (mycelium) themselves. The spawn is used to mix with the compost so that it is ready for cultivation. Compost production requires specialized technology and knowledge. The quality of compost, which must be properly disinfected, is very important for efficient production.

The larger growers produce and sell compost under their own brand name. A well-known name in Iran is Javeneh Compost, produced by Ramand Majar Agro-industries. This product is used by about 40% of Iranian mushroom growers. Until recently, compost was exported, but due to the higher demand in Iran and the more lucrative export market for fresh mushrooms, it has been discontinued.

Use of horse manure

In Iran, reasonable production levels of up to 24 kilos per square meter are achieved by professional growers. Productions of up to 34 kilos are achieved in the Netherlands. The use of horse manure in the preparation of compost makes it possible to achieve higher production levels, and Dutch substrate is a popular item in many countries.

In Iran there are middlemen who buy and sell cheap, substandard compost to small, inexperienced producers. This significantly reduces the efficiency of mushroom cultivation. Efficiency can be increased through better organization and logistics.

Some important producers of mushrooms, compost and spawn in Iran. 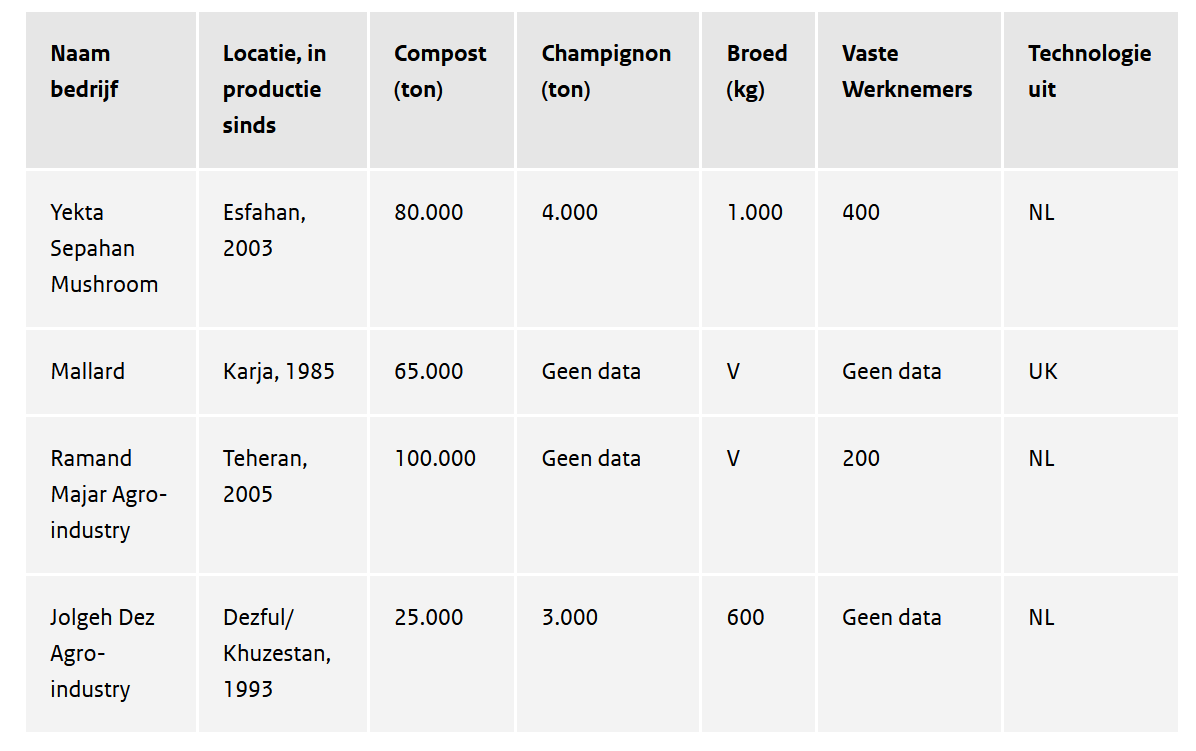 Supply and demand determine the price of mushrooms in Iran. In the past, the mushroom market was controlled by intermediaries. As a result, large price fluctuations occurred. Since 2018, a mushroom fair has been introduced by the Iranian Mushroom Growers Association (ASGI: Anjoman Senfi Gharch Iran). The purpose of the fair is to stabilize prices.

Not all producers bring their products to the stock exchange. The government claims it has no control over the price. The enormous inflation in the past two years (more than 500%) has led to very low prices in the current market. For example, the price for conventional white mushrooms on the local market is approximately € 1,00 per kilo. For exports to neighboring countries, approximately € 1,60 per kilo is paid, while the worldwide price is approximately € 2,10 per kilo. Due to the low price in Iran, the import of mushrooms is limited to exotic varieties. The export quality price of compost made in Iran is approximately € 200 per tonne (2020). Locally, prices can vary widely, from € 40 to € 200 per ton.

A lot of capital is needed to start a mushroom company, also in Iran. This start-up capital is needed for the construction of climate-controlled tunnels, packaging units, laboratories and machines and storage for the production of compost. The sometimes extremely high temperatures in Iran mean that high demands are placed on climate control. That is why foreign technology, such as from the Netherlands, is still preferred for key technology, but co-creation is advocated. Specialist knowledge is necessary for cultivation control. Experienced technical personnel are needed to manage the production process and to produce high-quality compost and mushrooms. Dutch companies can respond well to this.

For questions related to this article, please mail to the Agro team of the Dutch ambassy in Iran This email address is being protected from spambots. You need JavaScript enabled to view it.