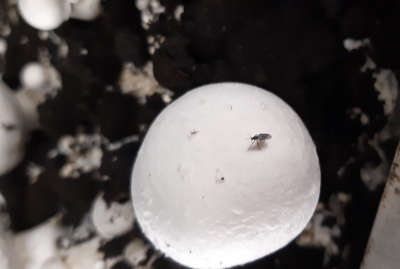 These three principles are the base of disease control on a mushroom farm. To my opinion there is no farm that has not a spot of disease somewhere.
But depending on what is done it will develop into a serious problem or it will stay a hidden time bomb.
If a problem is discovered it is of crucial importance that is recognised. To make sure that will happen training of people on the farm and especially pickers is needed. They are your eyes on the farm.
They need to know the most common diseases and especially in a young stage. Many places of dry bubble are not recognised and are only seen if the disease is in an almost incurable stadium. The small wart on a mushroom or grey spot is often missed.
The same goes for insects. Many growers do not know the difference between a phorid and a sciarid. Although the damage pattern is totally different, so Is the threshold where it really starts costing production. Also the cure is completely different.
Example: growers use diflubenzuron against phorids.
It is only active against sciarids.
If the disease is recognised then it should be isolated. It can be covered on the spot but the most important is to simply keep all doors closed. Check filters and door seals. If a room is infected, make sure the infection is contained in that one room and does not spread on the farm.
After the isolation the disease can be treated. If the spot is detected in an early stage one can do with just a sport treatment. If it is more the whole room should be taken on.
But too often the infection spreads and the whole farm must be treated. Generally room treatment for a full cycle with an overlap of two or three rooms to break the lifecycle of the disease.

So, just a test:
Look at the photo and spot the phorid. Or is it a sciarid?