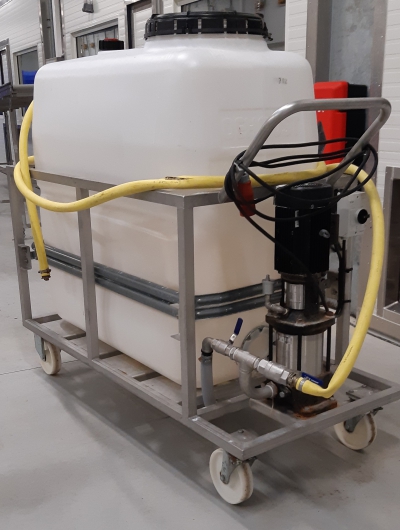 And they keep flying…

I am writing this blog on November 2. 2020.
It is the warmest November day ever. The outside temperature today will hit 20° C. Normally this time of the year in Europe growing is fairly easy. Older growers always say: just open the doors and let the outside climate do the job. This year and probably oncoming years the situation is different. It starts with arable crops being harvested later than normal. The potatoes are still being harvested and the corn is only gone this week. Meaning that there was a lot of dust and organic material flying around. Especially since many farms are situated in rural areas. All this organic matter being airborne has caused a big problem with Mycogone and verticillium. But another and maybe even bigger problem is that the insects are still there. It is known that phorids stop flying around 5° C and sciarids even fly till it starts freezing. And that situation seems to be far away. And that is why I see at many farms that the infection with sciarids was almost gone but is returning (rapidly) again. Because their hiding place in the corn is gone. Just at the moment when many farms are scaling down on fly control. The combination of these two factors, the insects and the dust causing bubble, is a dangerous one which may last for another month or so. What to do about it? Trying to kill the verticillium or Mycogone is the first thing growers do but if the vector (insects) to carry the spores is still there the problem stays. That is why I always try to aim at the insects first. In this case practically always a problem with mosquitos or sciaridae. Often chemicals are chosen and many times a combination of a short term chemical by fogging and a long term chemical as a drench on the casing soil. But lately I see very good results (as good as the chemical treatment) with the biological control with nematodes as a drench on the casing. In price there is not much difference but in application it does make a difference. It is not dangerous for the person who applies it and it is not dangerous for the environment. On the other hand it is noticed that many supermarkets want a clean, read: chemical free, product. And nematodes are not regarded to be dangerous. Even more, farms use it as advertising for their product. It is the same as with my own business “Akkie’s Tuin”. An apiary and orchard. We do not use chemicals, only biological control and we use that as a selling point. We notice that we can get higher prices for our products by working organic. The only thing is that the customer needs to know what you do. With the product goes the story about what you do. So if you have an insect problem at the moment take this into consideration. A few remarks on the use of nematodes. Make sure they are delivered fresh onto the farm and put them into the cold store right away. Overheated nematodes will die. When using them, you need sciarids on the farm. The nematodes feed on the larvae of the mosquito and if there is no food they will die. The manual about using the nematodes often says that they have to be applied directly after casing the compost. I however have better experience in the so called split application. So not the 2 million nematodes per m² directly after casing but 1 million on the casing day and the other 1 million 4 to 7 days later. I prefer 2 days before the start of the recovery period as the last day of application. So practically this means the second application on day 4 after casing. If you apply it a day before recovery you knock back the mycelium too much.

But whatever you do, do it now. If you think that frost will stay away for a while and you see some sciarids flying around, waiting is not an option. Especially is you also have a bubble problem. And the difference between sciarids and phorids is fairly big. As a reminder: Phorids have a nasty smell if you smash them under your finger, a sciarid has no smell. Phorids are fast moving. They walk fast. A sciarid has the tendency to just sit. Phorids are a lot smaller and the antennae are practically not visible while the sciarid has large visible antennae.