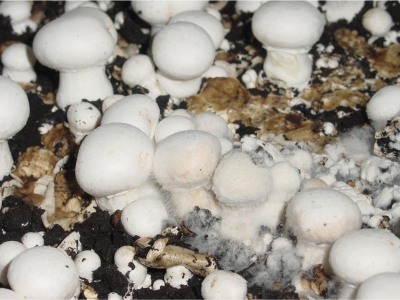 Lately I am getting a lot of phone calls again about cobweb disease. The growers see the first signs appearing at the end of the first flush and by the time the second flush is starting, the problem practically gets out of control. To beat the problem it is necessary to know where the disease is coming from and how it grows and spreads.

The cobweb mould is a soil born fungus, using a vector (taxi). The vector may be sand, dust, casing soil and all different materials used by the people on the farm. Think of brooms, shovels but also mushroom harvesting equipment. This way the spores of the fungus are transported. But the fungus does not have to reach the state of sporulation to be infectious. If the fungus is damaged is splitters like glass. Small particles of the fungus can regrow fast into a new patch of cobweb again. So only touching the fungus by hand or by watering is enough to spread it like wildfire. It grows best under warm and moist conditions. So to slow it down it will help to lower the RH in the room and to drop the temperature a bit. But it will not stop it.To stop it you will have to find the origin of the infection and stop that. Many of the infections I see at this moment seem to start during the first flush so I immediately look at the harvesting on the farm.

We make sure pickers change the gloves regularly and disinfect the knives every day. The clothes of the pickers have to be changed daily and we look at the logistics of the farm. No one is allowed to move backwards in the schedule. In other words, if you where in a second flush, never go back into the first. For the grower it means a lot of cloth changing. After every check of the rooms. On many farms it is also necessary to look at the handling of the trays. Testing showed that many of the multiple use trays are infected with moulds. Even trays that are claimed to be disinfected. An effective method is to make sure that multiple trays are staying in the room where they are used. So if they are left over after the first flush, leave them in that room and use them in the second flush. If trays are coming out of the room with a possible infection, store them separately. And not in a room with other packaging.

The best way is to carry out the disinfection yourself. Steam the incoming trays properly in a container or a room designed for steaming out. Preferably not in a cookout room because the trays will smell terribly after that. After cooking out one can use a swab test and an agar tray to see if the trays are clean enough to be allowed onto the farm.

So to eliminate this disease make a list of possible infection moments and go through the list one by one. Only this way, by taking out all possible infection points, the disease can be controlled. Because chemical control is almost impossible and most of the times not allowed. And if you see the disease it is already to late to do something. The only thing left at that moment is to cover it widespreaded with salt and to stop watering immediately. And then start eliminating it with all possible measures.