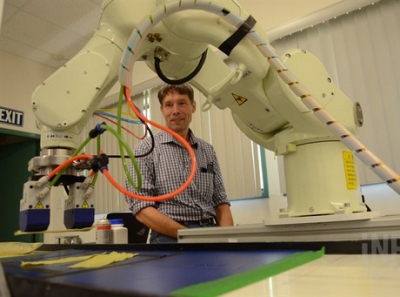 A company in British Columbia is working on the cutting edge of technological design. Salmon Arm's Technology Brewing Corporation has just been awarded $50,000 from B.C.'s Agritech Innovation Challenge for its development of a vision-guided robot capable of accurately picking, trimming and placing mushrooms in store-ready boxes.

"I'm often (asked) aren't you worried about taking people's jobs? Everything that we've automatized people don't want to do," Technology Brewing founder Mike Boudreau said. Boudreau built his first robot in 1985 and launched Technology Brewing in 1999 transitioning the company into robotics in 2006. As someone on the frontline of the robotic world, Boudreau explains the industry, and it isn't quite what one would expect. The jobs the company's robots have been designed to do are far less glamorous than the robots themselves.

See, identify and pick
As mushrooms come in different shapes and sizes, and at some stages of their growth double in size in just 24 hours, Boudreau's company is developing a robot that can see the mushrooms, identify which ones to pick and which to leave. If it sounds complex and expensive it's because it is.

TenCate Nicolon in the spotlight Fungus: The Plastic of the Future
back to top
Cookies make it easier for us to provide you with our services. With the usage of our services you permit us to use cookies.
More information Ok