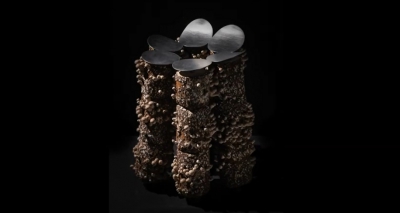 In an effort to learn more about natural decomposers such as fungi and bacteria, Japanese designer Satoshi Itasaka unveils the ‘Fungi Stool’. As its title suggests, the stainless steel and wood stool is composed of fungi that grow and bloom, like flowers, into mushrooms.

‘It is no exaggeration to say that the cycles of nature are carried out by bacteria and fungi,’ Itasaka notes. ‘Bacteria and fungi have been the decomposers in the food chain keeping the earth’s environment in a healthy state. They are the ones we should follow for we are constantly putting a burden on the earth in terms of the global environment.’

Satoshi Itasaka’s Fungi Stool highlights the importance of preserving fungi decomposers as they play a crucial role in our ecosystem. It also proposes a more sustainable direction to furniture design. Its seat is made up of a circle of six discs that somewhat resemble mushroom caps huddled next to each other.

‘There are about 100 trillion bacteria in our bodies’, the product designer explains. ‘Therefore, we live in symbiosis with about three times as many bacteria as our own cells. Although we are sometimes tormented by bacteria, the environment in which we live would not be possible without decomposers such as fungi and bacteria. The world is in the midst of a sanitization boom, but I designed a device to learn more about these decomposers, not to get rid of them. I found that the fungi grew unexpectedly in that apparatus. The fungi grew and blossomed like flowers, producing numerous beautiful mushrooms.’