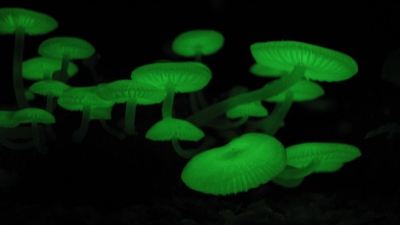 Why Do Some Mushrooms Glow In The Dark?

picture: Only 71 species out of over 100,000 described species of fungi glow.

Glowing in the dark costs energy. So why do mushrooms bioluminescence?

To answer this question, researchers from Brazil and the U.S. focused on the pale green light emitted from fungi. They had a hunch that the light attracted insects. Fungi produce tiny spores to spread themselves, much like seeds from trees. Insects can help transport the fungal spores. The researchers were also curious if glowing brighter attracted more insects.

The fungi Neonothopanus gardneri, glows strongly at the bottom of coconut palms in Brazil, near the transition ecosystems by the Amazon forest. Down below the palms, the mushrooms are exposed to less windflow, so they need to find another way to spread their spores in order to be reproductively successful.

Originally it was thought that these mushrooms glowed all the time. Constant bioluminescence uses a lot of energy, so the researchers wanted to examine if this assumption was true.

Last modified on Thursday, 28 November 2019 09:23
The benefits of mushroom coffee, according to doctors The Thirteenth Chinese Mushroom Days
back to top
Cookies make it easier for us to provide you with our services. With the usage of our services you permit us to use cookies.
More information Ok