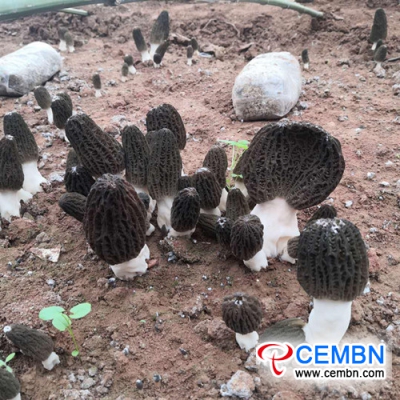 On April 22, Morel mushrooms cultivated under walnut tree are showing desirable growth trend in mushroom base of Qianyao Village, Luoyang City, Henan Province of China, growers are engaged with mushroom picking.
“Our village incorporates 122 poor households totalling 505 poor population. In order to help them get rid of the hat of poverty, we decided to plant Morel mushrooms in walnut forest that covers 2076 mu of area,” introduces head of Qianyao Village warmly, adding that this kind of interplant pattern not only simplifies the process of sunshade, but also saves cost. Besides, residues of Morel mushroom also provide nutrition for the growth of walnut tree, thus enhancing the output of walnut and improving the utilization rate of land.
“The first batch of Morel mushroom were sold out after they appear on market. Now, the second batch are about to be picked, by now, we have received orders of at least 50 kg. Looking into the future, i am confident in turning this characteristic industry into the GOLDEN ROAD that leads villagers to end poverty and grow prosperous,” said head of Qianyao Village excitedly.